Eric Grayson is a normal fourteen year old boy attending a boarding school with his three best friends: Corbin, Rose and Lydia.  His life changes completely one day when he finds himself in a different world, being asked to help an unknown boy just a few years older than himself.

Eshla is a world divided into four distinct regions, where the plants and flowers have special properties to create energy and light – amongst other things! The land is recovering from war but the evil Lowick Bradwar has imprisoned three princes deep underground in the Bel-Arayba cave and disappeared with the keys down the chasm which connects his world with ours. Prince Joel survived the war, but needs help from an Earthling to release his brothers. Eric agrees and starts his quest with a little help from his friends, and a furry blue sausage-loving creature from Eshla. The adventure sees the four friends: travelling through time to the roaring twenties; acting in plays; facing the cane and joining a battle! 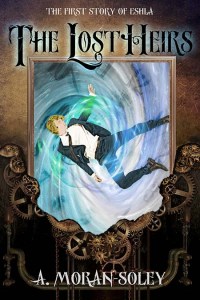 Buy now, or download for free on Kindle Unlimited