How lovely to land back in the country and discover that the third book in a great series is available!

I’ve just brought ‘Seer’ by Amy Reece – a review will be here soon. In the meantime, happy reading everyone! 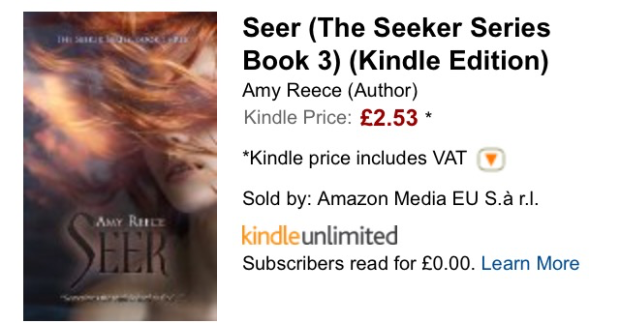 A without naming any names (obviously!) I find myself drawing far more on real life people for the bad characters in my book, than I do for the nice ones! Does anyone else have this experience?
Both of my current villains, Lowick and Galed, draw off the idea that appearances can be deceptive. They can be charming and appealing until their inner motives surface. I’ve known a lot of people like that over the years, male and female! These two characters are a bit of a homage to those special folk!

‘Mr Bickward had never stood out in any way or struck him as anything but ordinary. He was strict and had a glare like medusa, but most teachers did. He certainly didn’t fit the idea of the power hungry despot that Joel and Chase had described, but then again, how would a power hungry despot masquerading as a teacher behave? Eric thought back to a lesson of his that Mr Bickward had covered three weeks earlier. The man wore a suit and a tie, like most of the male teachers at Smith- Chigley, and he had taught them very enthusiastically. Eric and Corbin had sniggered secretly at Bickward’s hair – straight thick brown hair that was supposed to be slicked down in a side parting but sprung back up and waved about excitedly whenever he moved too fast. He had a thin face with angular cheekbones and large hazel eyes. Eric remembered overhearing a couple the girls giggling over how good looking he was but all in all he just seemed like any other teacher.’

‘A shadow fell across the table and answered the question for him in the shape of a girl a couple of years older than the two boys. She wore a cream blouse and lacy waistcoat with a bulky layered skirt and brown boots but most striking was a tightly lace collar around her neck that fanned out into a large ruff. At first glance it gave the eerie impression that her head was on a plate floating above her body! She smiled tightly at Eric nodding her head briefly at Corbin so that the dark red curls piled up on top her pixie face wobbled about dangerously.’

Buy online at Amazon to read more:
The Lost Heirs: The first story of Eshla by A. Moran-Soley http://www.amazon.co.uk/dp/B00NJX2DQY/ref=cm_sw_r_udp_awd_gk4Wub0S38793